"This is the work of a writer who has tremendous ability and tremendous potential. One to watch."
- Five star Amazon review of The Hollow Places

"It had me captured from the moment I started and I couldn't put it down." - Five star Amazon review of The Hollow Places

"For the driver, only three things existed: the road, the wheel, and the woman in the back seat."

There's something in the water, preying on animals, men, women and children along the UK coastline. Like his father before him, Simon has been tasked with providing live bodies for the thing. With his natural ability for the work, he is beginning to think he might enjoy it.

Then the creature asks for something he can neither give nor forgive: the life of his little sister.

Simon has just a few hours to save both their lives and so begins a bloody journey in search of rescue, revenge and redemption. 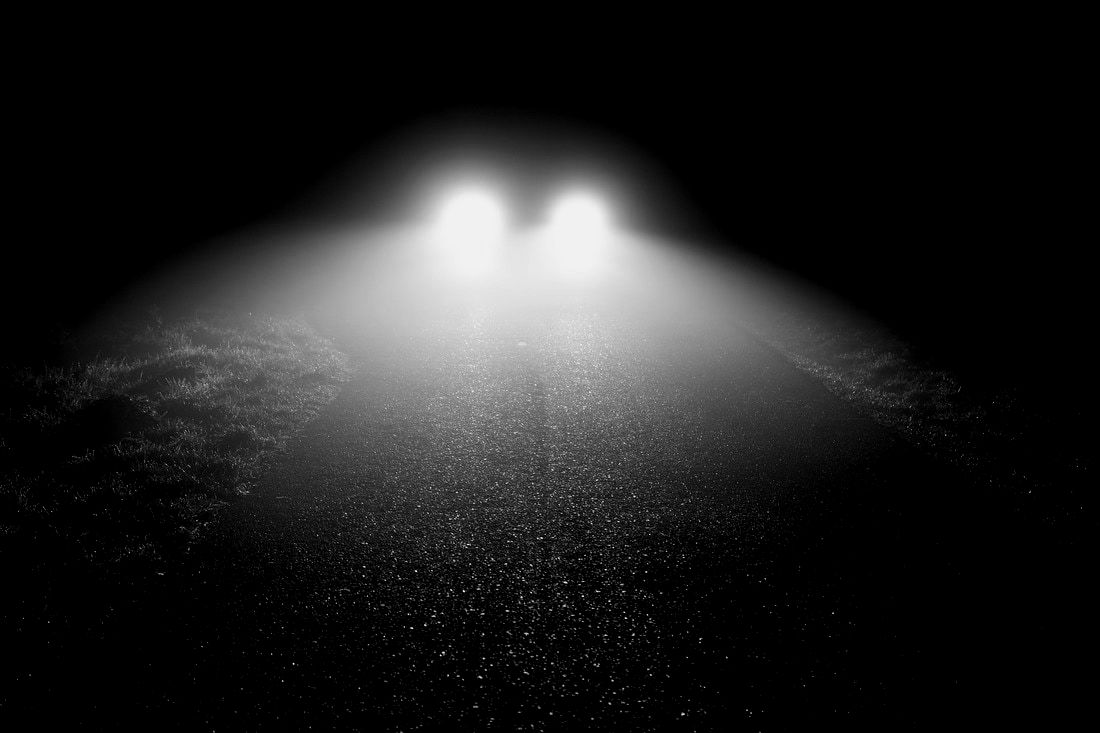 For the driver, only three things existed: the road, the wheel and the woman in the back seat.

A glance in the mirror showed him nothing but the rear windscreen, so he took a look over his shoulder and saw that the woman hadn't moved, sitting with her head between her knees, a fall of dyed blonde hair, making burping sounds and sniffling.

“It’s okay,” Simon said and kept the car sliding through the darkness. He was enjoying a heightened state of awareness and sensed each turn before it appeared. His foot on the accelerator, he knew that they were unlikely to encounter anyone else on this road. It was just him and her.

When she sat up, her large, brown eyes were very dark and ringed with red. Her skin was waxy, streaked black with mascara.

“Oh-my-God, I am sorry,” she sniffed and wiped her mouth with the back of her hand.

It wasn't his car.

Unknown to her, Simon watched her wipe her hand on the fabric of the back seat and then strain to see past her ghostly reflection in the glass. He offered her a bottle of water.

“I don’t think it is good for me,” she said, her Parisian accent coming through. “It will just make me more ...” She gestured throwing up and had to suppress another wave of nausea. “We are nearly there?”

“This way will avoid the traffic,” Simon said.

This way would avoid everyone.

Trees linked arms overhead, attempting to seal out the moonlight. Their leaves glowed preternaturally in the headlights before becoming ash-black and then scarlet as they rolled by. Ahead, a steep incline began winding down to the sea coast, but they would turn off before they reached the bottom.

“This might help,” he said, winding his window part-way down.

The sound of waves smothering rocks and then sliding back, crashing and retreating, accompanied the fluttering of owls or bats and the scampering of unseen things in the trees.

He might have found it disturbing, but he was on a high now and found himself observing the fine, curly hairs on the backs of his hands before remembering the road. The road appeared to be undulating beneath him, as if their destination was sliding towards them and the car was still.

“So, you really think it is broked?” she asked, holding up her hand, which was very small and pale, except for her little finger, which was swollen and almost black.

“We need a medical opinion," Simon told her. "I’m a taxi driver.”

He glanced in the mirror to see if she knew she was in trouble yet.

She was peering though the passenger windows, first one side and then the other. Both views offered her something that evidently upset her.

"This isn't London," she said. "Where is the hospital?

"Not far now," he said, though his heart wasn't in it.

She was starting to panic.

“How long you have been a taxi driver?” she asked.

“My mother owns a boutique and my father is a designer. They have money. A lot of money."

Some people attempted to develop a rapport with him to dissuade him from murdering or raping them. This young woman had gone straight to bargaining. She was sobering up fast and in other circumstances he might have liked her, though it was a long time since he had thought of anyone but him and his sister. Their survival came first.

The turn was coming up.

The usual sensation occurred as he slowed the car. He could feel the turn 'glowing', calling to him. It was like being pulled in by tractor beam.

He flicked off the lights.

“What are you doing?” She sat forward and he got a waft of vomit and perfume.

“Sit back,” he ordered her. “A rabbit in the road, that's all. Headlights dazzle them.”

She flopped back in her seat and Simon completed the narrow turning into the woods.

His eyes flicked back and forth from the forest to the rear view mirror.

She was trying the doors. Of course they were locked centrally. From the look in her eyes, she appeared to be thinking about screaming, but probably didn’t want to admit that she was in that much danger yet. She saw no point in accelerating events when she may still be able to talk her way out of this, whatever this was.
She sucked in a lungful of air, stifling another wave of nausea. Still and tense, she stared at her reflection in the black glass, until she was over the worst of it.

“So … Vincent,” she began. “Why don't I call my parents, before my friends do, and organise some money? Then you let me to go. It is easy to do.”

“I’ll do a deal with you,” Simon said. “You can ask me five questions and I promise to tell you the truth, answering yes or answering no. But then you have to stop talking.”

His night vision had become very good over the last few years, so he was able to discern a route ahead by squinting through the windscreen. After a few moments, however, he found that he knew when to jog left and jog right, and gradually let go of control, guided. The vehicle bounced down a new incline, crunching dirt and dead leaves. They could have been driving in a bubble at the bottom of the ocean, or bumping along over the dark side of the moon.

“Where are you taking me?”

“Have you never played Twenty Questions? You can still have five.”

“Stop fucking around,” she said. “What are you doing?”

“Can I please go home? Please.”

Simon stopped the car, shut off the engine and faced her. “You can ask two more questions,” he told her.

She couldn’t announce her fears out loud. She still didn't want to make it real.
Simon opened her door from the outside and held open a plastic, supermarket bag.

“Empty your pockets into this,” he said.

She squirmed around on the back seat, reaching into the pockets of her skin-tight jeans. It took some time, because she only had use of her right hand. She managed to retrieve a plastic lighter, some tissues and a phone number written in blue ink on a strip of paper. She dropped each one into the bag.

“My purse is in my handbag,” she said.

“Drop it in,” he told her and she unzipped it, searching for the purse. “No,” Simon said. “Your handbag. The whole thing.”

She dropped it into the carrier and looked up into his face, holding his gaze. He imagined how he must look to her. It was difficult, because since he had got out of the car he felt very little. He watched her face for some clue as to how he might appear to her.

After thirty seconds or so, her eyes began to tremble. Whatever she'd been searching for in his eyes, she hadn't found it.

She managed to punch him in the face as he leaned in, but her fist glanced off his cheek and soon he was hauling her out into the night. As she struggled, she reignited the pain in her dislocated finger and cried out, so Simon clamped one hand over her mouth and that’s where it stayed as he pulled her away from the car and forced her deeper into the forest. He held her body tight against him, knowing that her attempts to scream for help would give way to sobs. Soon, he could feel her tears and snot running over his fingers, the chill in the wind making his wet hand feel icy.

When her legs gave way, he responded by picking up his pace, dragging her towards the sound of waves until they came to a clearing, where he remembered to pop her finger back into place. He muffled her howl and subsequent whimpers. A couple of minutes later, she settled and he relaxed his hold on her.

She took in her surroundings, realising that all the while they had been approaching the edge of a cliff.

“Are you going to let me go now?” she asked quietly.

It had helped him to think of it as a game, but now she was all out of questions and he was out of time.

“Yes and no,” Simon said. “You’re going to be okay. After a few minutes, you won't know what's happening. You won't feel anything.”

Stifling her protests, he dragged her through the rest of the clearing, towards the edge. Her eyes rolled and she stamped her bare heels, grinding her toes into the dirt, but he was much too strong for her. She was punching and kicking, but he lifted her from the ground, dumped her onto one shoulder and stood facing the drop.

Silvery clouds shrouded the moon in the dark, blue sky, and the black sea rolled below, toiling and growling up at them.

He imagined himself carrying her back to the car, setting her in the back seat, and driving back to the road before dumping her somewhere, alive, but the idea alone was enough to promote a headache. It was as if a finger penetrated the back of his skull and a sharp fingernail began peeling back a layer of brain.

“Okay!” he thought in response and winced. “I’m doing it!”

He pitched her over the edge, almost losing his footing in the process, making his stomach lurch.

She didn’t scream. The last sound she made was a gasp. Perhaps she was surprised that he'd really dropped her, or perhaps she was sucking in the air for a scream that didn't have time to materialise.

Simon peered over the edge in time to see her body disappear into an enormous wave. It arced over the rocks and plucked her out of the air. Sea water crashed against the cliff, showering Simon’s face, shoulders and chest. The woman's body was gone. Taken.

Only once had he been this close to the Creature.


End of Chapter One

Thanks for reading! If you enjoyed being in this world and would like to know what happens next, download the entire novel for free.